Sarawak and the Penan 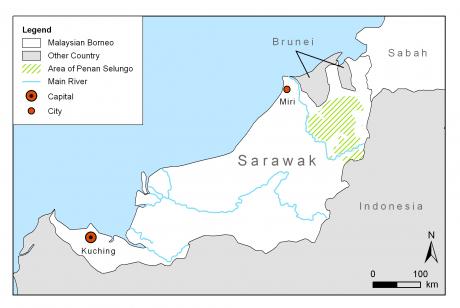 The Malaysian federal state of Sarawak on the island of Borneo is one of the regions on Earth with the greatest biodiversity. Its rainforests are home to numerous plants and animals and a rich, indigenous culture, on which the centuries have left their mark.

Sarawak became part of Malaysia in 1963. Before that, the state, which was founded in 1841, had been a private colony of the British Brooke family for a hundred years before becoming a British crown colony after the Second World War

Sarawak is Malaysia's largest federal state and also the one with the sparsest population. Some 2.6 million people live in Sarawak and belong to more than 40 different ethnic groups. The Muslim Malays and Melanau account for one quarter of the total, while the Chinese form another quarter. Roughly half the population is comprised of non-Muslim indigenous inhabitants, amongst whom the Iban constitute the biggest group. The Penan and other peoples living in the country's interior are sometimes referred to collectively as "Orang Ulu" (upland dwellers).

As a partially autonomous federal state of Malaysia, Sarawak enjoys a great deal of freedom in shaping its policy on resources. For the past thirty years, this policy has been determined to a decisive extent by the despotic former Chief Minister and current Governor, Abdul Taib Mahmud. The exception to this is the use of the very significant oil and gas reserves, which are controlled by the federal government in Kuala Lumpur. Vast areas of Sarawak's rainforests have been chopped down by the Taib regime. Analyses of satellite images show that today approximately 10% of the primary forests are still intact. Plantations, especially oil palms, are expanding rapidly. In 2012, one twelfth of Sarawak's total land area of 124 450km2 was already covered in oil palms (that corresponds to about one tenth the area of England). At present, the Taib regime is working on building at least twelve dams in Sarawak’s rainforests.

Governor Taib himself and his family have profited tremendously from exploitation of the natural resources. Taib has abused his political position to issue logging concessions and plantation licences to members of his family and his political lackeys. He has also given them huge state orders in exchange for generous donations. Today, the Taib family controls a vast business empire with holdings in the logging and plantation industries, the electricity market, real-estate companies and the media. During the time Taib has been in office, his family have acquired holdings in more than 400 companies in 25 countries spread all over the world. The Bruno Manser Fund estimates that Taib's assets run to 15 billion US dollars.

Violations of human rights go hand-in-hand with the aggressive exhaustion of the natural resources in Sarawak. The Taib government is doing all it can to prevent recognition of the traditional territories of the indigenous inhabitants. Instead of that, these lands are declared to belong to the state and are then leased out to logging and plantation companies. As a result of this policy, the indigenous inhabitants are left with no rights to their own land, and it becomes impossible for them to continue to lead their traditional way of life. Several more recent court judgments have shown that this policy is unlawful and that the indigenous people's native customary rights must be recognised. In conflicts over land, however, the burden of proof lies with the indigenous inhabitants.

There are approximately 10'000 Penan and they form two peoples, the Eastern and Western Penan. The Bruno Manser Fund works with the Eastern Penan (Penan Selungo), with whom Bruno Manser himself lived for several years. They are to be found in the basins of the rivers Baram and Limbang, right in the north of Sarawak.

Originally, the Penan lived as nomads in and of the rainforest. They obtained their food from hunting, fishing and gathering fruits and plants. The Penan's staple food is sago, a high-starch flour from the mark of the sago palm, which is processed into a sort of porridge. The Penan still hunt with their traditional blowpipes and poisoned darts, but they do now use firearms too. When they were nomads, the Penan used to move on as soon as they had exhausted the sago resources in any one location. They use rattan (the fibres of a wild palm) to weave mats and baskets.

The Penan's way of life has changed radically since the middle of the twentieth century on account of external influences. The originally animistic Penan were christianised by missionaries belonging to the Australian Borneo Evangelical Mission and underwent baptism. In the course of the last fifty years, all the Penan kinship groups have settled, but some of them have maintained semi-nomadic elements from their traditional culture.

When rainforest clearance began in the 1980s, it brought a massive upheaval to the Penan's way of life. Logging destroys not only nature, the basis of the Penan's livelihood, but the very existence of their unique rainforest culture. The history and identity of the formerly nomadic people is tied up with its forests.

Assisted by Bruno Manser, the Penan began to organise themselves in the late 1980s. By erecting blockades on logging roads, they attempted to prevent further incursions by the timber companies. This resistance attracted a lot of international attention to the Penan, especially in the 1990s. Through such actions, a number of primary-forest regions were successfully saved from destruction.

Today, the Penan are continuing with their struggle against the deforestation of their habitat. More recently, they have also had to face up to the threat posed by plantations and dams. The Bruno Manser Fund is helping the Penan in their endeavours to conserve the rainforest and their culture. The projects and campaigns give you an impression of our work. 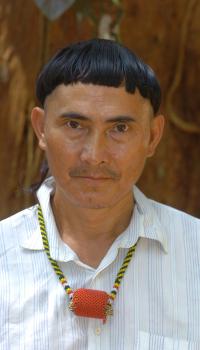 «Our primeval forest is full of mysteries and valuable resources.»