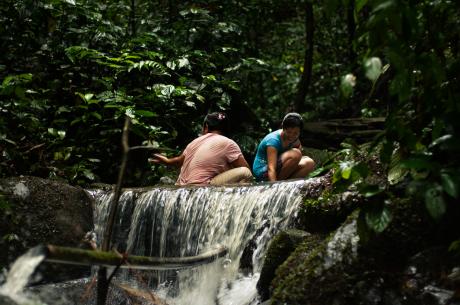 The Penan have managed to save thousands of square kilometres of rainforest from clearance by erecting blockades with the direct assistance of Bruno Manser in person and with the support of the Bruno Manser Fund. In the Upper Baram region, in particular, 18 Penan villages have joined forces to create the Penan Peace Park, preserving large areas of primeval forest.

Enforcing claims to land through the courts

Since the end of the 1990s, the Penan have filed seven land-rights cases with the support of the Bruno Manser Fund. These are opening up a real possibility that the Penan will one day obtain official titles from the government for the land and rainforests where they have traditionally lived. That would mean that they would finally be able to decide themselves on the use of the rainforests and make deforestation into a problem of the past.

The Penan’s living environment and their way of life are subject to never-ending change. Thanks to the efforts of the Bruno Manser Fund, the Penan are stronger today when facing the outside world. Awareness-building in matters of human and land rights, a better appreciation of the value of their own culture, and support in organising their communities have ensured that the Penan are today better able to present their case to Malaysian society and to appear with greater self-confidence.

The culture of nomadic rainforest peoples has been more or less entirely wiped out throughout the world, and there is virtually no one still left living that way today. In its documentation centre, the Bruno Manser Fund is collecting first-hand reports from individuals who have lived the nomadic way of life now threatened with extinction. The Penan culture must not be allowed to be forgotten and must be kept alive, especially for the Penan themselves. The maps, the documentation of oral traditions and the results of the mapping project are all making an important contribution in this respect.

Improvement in the Penan’s living conditions

The Bruno Manser has brought tangible help to the Penan villages through numerous projects. Whether preschools, medical care or infrastructure, like bridges and water pipes, the Bruno Manser Fund is always on hand to assist the Penan whenever they need it.

Unearthing and reporting on injustice and wrongdoings

Thanks to the work of the Bruno Manser Fund, the public throughout the world has been informed of the exploitation of the rainforests, the appalling situation of the indigenous peoples and the corrupt practices of the Sarawak government. The BMF never tires of drawing attention to outrages in the rainforest. It also helps when international attention just happens to have wandered off to other issues. It also finds itself repeatedly playing a central role inside Malaysia itself in uncovering abuses.

The Bruno Manser Fund confronts international companies conducting business in Sarawak with the impacts of their actions and, in this way, has succeeded in bringing about changes in behaviour. One example of this is a campaign organised by the BMF that led Credit Suisse to issue internal guidelines on handling investments that have anything to do with forests. In reaction to work done by us, Accor, the French hotel group, brought pressure to bear on its business partner, Interhill, a Malaysian logging company, to improve its management of the forest and to grant greater rights to the indigenous peoples affected. The Australian energy group Hydro Tasmania felt forced to make massive reductions in its participation in the planning of dams in the Sarawak rainforest.

Official investigations into the corruption of the Taib family

Since 2011, the Bruno Manser Fund has uncovered numerous instances of corruption and nepotism in the timber and energy industries in Sarawak. Thanks to these efforts, it is now known in Malaysia and all around the world that Sarawak's long-standing chief minister, Abdul Taib Mahmud, has accumulated most of his wealth, estimated at 15 billion US dollars, through corruption and abuse of office. The authorities in various countries have started to carry out investigations into the Taib family as a result of the initiatives taken by the BMF. 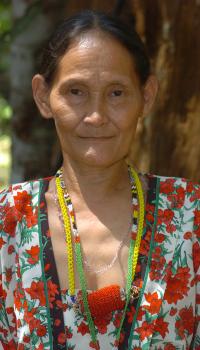 «The Chief Minister lied to us. He promised us a biosphere reserve, but nothing has come of it.»