The Sarawak Geoportal provides digital access for interested members of the general public to the geographic information collected by the Bruno Manser Fund. The interactive maps present various items of information on the Malaysian federal state of Sarawak in a comprehensible graphic form. Apart from the basic geographic information, the portal also publishes various thematic maps as well as data on deforestation, dams and other topics. The best way to appreciate what the interactive map has to offer is to take a look at it without delay. 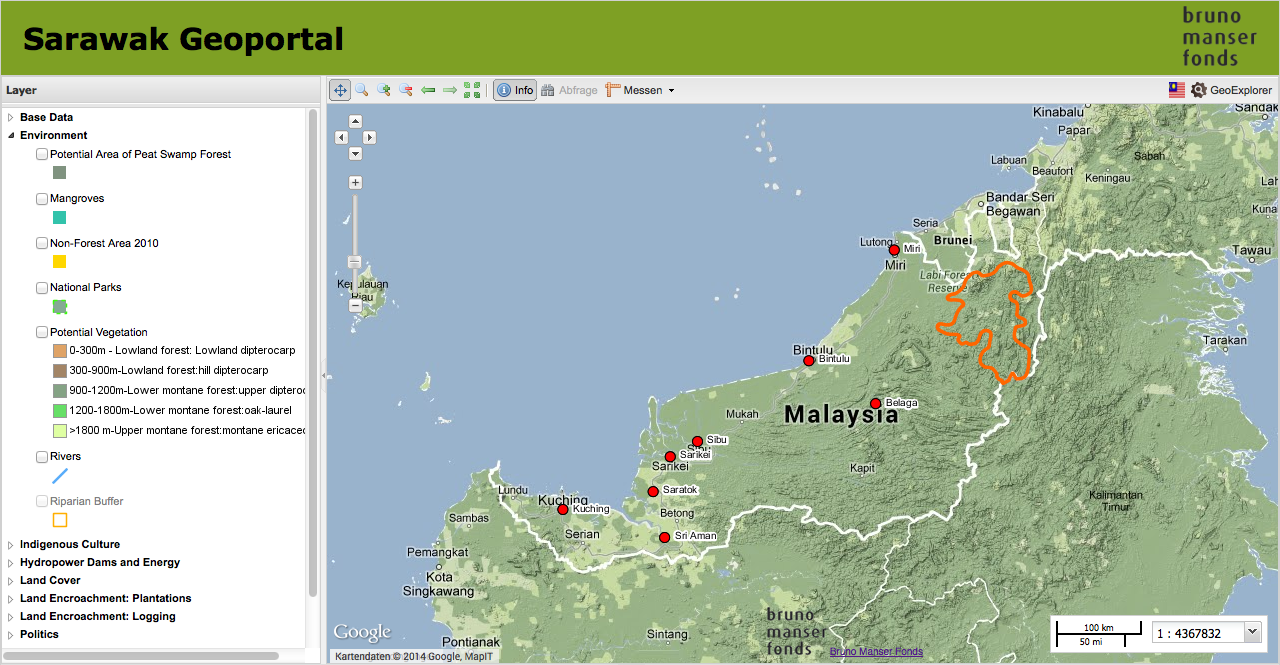 Go to the enlarged view of the Geoportal

Background to the Sarawak Geoportal

The Bruno Manser Fund has been in existence for more than twenty years now. In the course of that time, it has collected and processed large volumes of information about Sarawak. Thanks to our mapping project, we now possess a large database containing geographic information on the Penan and the rainforest in Sarawak. The aim of the geoportal is to ensure that anyone interested can have access to relevant information that was previously only available internally.

The Sarawak government publishes only very scanty information. The Sarawak Geoportal is a direct reaction to this shortfall in information. It is setting out to show the public the geographic information we have collected and to create a transparent situation. The interactive map is thus available not only in English but in the Malay language too, which makes it easily accessible for everyone in Sarawak who is interested in it.

The geoportal provides not only topographic and historic maps but also fundamental geographic data, such as settlements, roads, rivers, land uses and vegetation types. In addition to that, it presents thematic information on concessions granted for logging and oil-palm plantations, the advance of deforestation fronts and the areas of land flooded by dams already built and planned.

The data published is integrated in a google topographic and satellite map. It is based on digitisation carried out by the BMF itself and continuously updated. Given the never-ending changes in land uses and the continuing deforestation, the information cannot always be presented in real time. We do, however, update it as frequently as we can.

Further information about the geoportal data is to be found in our data factsheet.

Our introductory video will help you make the most out of using the geoportal. If you have any questions or suggestions, please get in touch with us at geoportal((at))bmf.ch.